Among the wide an assortment of fishing tackle, one of the leading places in terms of popularity and productivity indicators is dragnet (net, fishing drag). Once, several centuries ago, he was destined to turn into a real breadwinner - he was the most affordable device for all categories of the population, which made it possible to provide himself and the whole family with always fresh, high-quality and healthy meat. Despite the expansion of the model range of fishing equipment in the 21st century and the emergence of high-tech devices among them, the net continues to occupy one of the leading positions, attracting the attention of both professionals and beginners who want to buy fishing dies.

What you need to know about the device and how to use the gear?

The dragnet for fishing consists of two wings (left and right), on which a net with a guzir is fixed - that is, a central pocket in which, as in a trap, the entire catch is collected. To keep the diving afloat, lead sinkers are attached to the bottom of the pocket, and large foam floats are mounted on the upper surface. Between sinkers and floats, a weight balance is necessarily maintained, otherwise the tackle will either sink or cannot go under the water. Since fishing with a net involves its transportation with prey underwater, the gear is also equipped with draft rope-cuts.

The procedure for operating and storing gear is as follows:

• it is necessary to decompose the ditch for fishing and in a horizontal position lower it into the water;

• tackle “cuts” the water space between the bottom and the surface of the water and prevents the fish from going to the bottom;

• Once on the surface of the net, production will eventually penetrate into the recess - the bubble;

• the catch moved by the fishermen to the tackle reaches the shore, after which the net will be devastated;

• after use, the device requires purification in ordinary water;

• Following this, it is necessary to allow it to dry well (but not under the sun, so that the net begins to collapse later);

• Then you can roll up the fishing net and hang it for storage until the next use.

Regarding the specifics of the application, it should be indicated that buying a dragnet is profitable since the use of the gear is permissible in shallow water for all seasons. Many anglers emphasize that autumn-winter fishing is more effective since vegetation no longer floats in the water and does not prevent the tackle from being pulled to the surface.

What are the benefits of seine fishing?

Among the advantages that the dragnet for fishing is known among fishers, the following are distinguished:

• the opportunity to buy a net for amateur and professional fishing on an industrial scale;

• simplicity in operation, care and storage;

• long service life thanks to high-quality kapron thread from which the net cloth is made;

• the ability to use fishing ravings in any water bodies in shallow water;

• a variety of variations in the performance of tackle - different lengths and heights, small and large mesh, different-winged and uniform wings.

We offer to buy a net in Ukraine by visiting our online store. A wide range of products presented in the catalog will allow you to choose a fiber that fully meets your needs and features of the planned fishing. 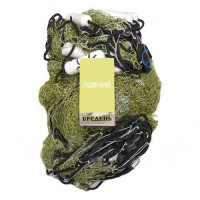