Commercial fishing with nets does not stop even in the cold season. But the icing of water during the raging winter elements creates an obstacle to the installation of these fishing tackle. To overcome the problem, you need to buy a torpedo to install nets under the ice. There are two varieties of torpedoes under ice: Plastic and iron. On this page of the catalog, you are presented with a metal model of the device, which has proven itself on the positive side and received approving feedback from both beginners and fishermen with many years of experience.

How is a torpedo arranged?

The device consists of a metal case, inside of which there is an electric motor and eight batteries that provide power to the latter and, as a result, the movement of the torpedo itself. The body has a cylindrical shape. There are two wheels on it, the edges of which are serrated and sharp, and therefore able to ensure the device is engaged in ice.

Also on the body of the torpedo are two LEDs that provide the visibility of the device during its movement under the ice:

• for one diode, the light is not very bright, lights up when the engine starts and does not go out while the device is moving;

• in the second, the illumination, on the contrary is bright, flashes when the engine stops working and shows at what a point in the reservoir the device stopped.

The metal torpedo of the presented model is designed to be lowered into the hole, the diameter of which is from 130 mm. Among the advantages of this device should be highlighted:

• tightness and aversion to leakage;

• the presence of an anti-corrosion layer on the surface of the metal casing, which protects it from corrosion by rust;

• non-susceptibility to mechanical damage and, as a result, a guarantee of a high degree of engine protection;

When using the device, do not forget to check it for the accumulation of water inside. The liquid must be removed without fail. To do this, unscrew the bolt in the bow of the torpedo and drain through the opening.

How does a torpedo work?

The rope for installing the net under the ice of the desired length is tied to the frame at the top of the device. Then a 15-cm vacation is made and the same rope joins the one that comes out of the torpedo and is responsible for setting it in motion and stopping the engine. If you perform the correct tying, you can not worry about the fact that the device will slip under the water into the distance forever.

Further, a hole is drilled in the layer of ice on the surface of the reservoir. After the hole is ready, a torpedo starts with a jerk of rope. If a click sounds, it means that the device is ready to move.

A working torpedo lowers into the hole, and with its nose, it goes to where it needs to move, and the device begins to move under the ice while pulling the rope to install nets under the frozen layer. When the rope is stretched, the torpedo stops in the same jerk as at launch. A bright LED lights up, and the fisherman can clearly see at what point in the pond to look for the device. Near this place is drilled another hole, from which the torpedo is removed. Next is the direct installation of the fishing net.

If you are interested in a high-quality and reliable torpedo for installing nets, then you should purchase a device from us. We guarantee:

• discounts due to accumulated bonus points.

Qualified managers will provide advice on the acquisition and will help to avoid mistakes in the selection of gear and adaptations to them. 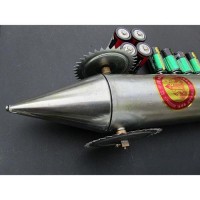 Metal torpedo Commercial fishing with nets does not stop even in the cold season. But th..